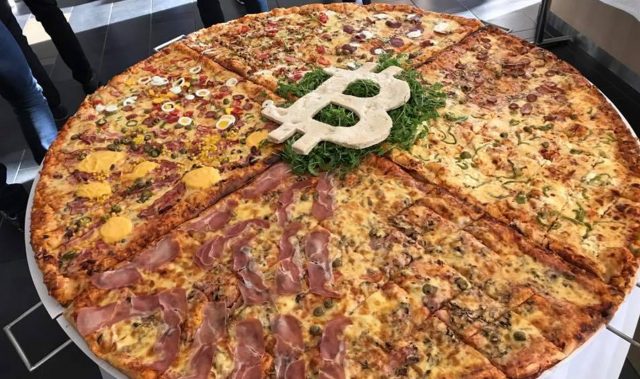 7 years ago, on May the 22nd 2010, an American and a Brit made history. The guy wanted to buy pizza, so he offered 10,000 bitcoins for two pizzas. The Brit wanted to pay with new cryptocurrency with a very low market value, so he phoned Papa John’s and sent the American the pizza he wanted. The offer was accepted, so transaction was done. At that time, the value of the BTC was only $0.07, while it would be more than $20 million today!

That event represented the first real world transaction with decentralized free market money in history, so it later became the event which bitcoiners celebrate every year on May the 22nd, called “Bitcoin Pizza Day”. In 2010, the programmer Laszlo Hanyecz paid a fellow Bitcoin Talk forum user 10,000 BTC for two Papa John’s pizzas. Back then, this technology was just one year old. The overall price of this transaction was roughly $25. When we do some simple maths, we can conclude that it was the most expensive pizza in the history.

On this day, everyone should be encouraged to by a pizza with decentralized free market money, but it can be a little costly with Bitcoin. The other solution could be to find a place that accepts Ether and buy pizza with ethereum, as there are several places that accept it.

Hanyecz made an interview with The New York Times, remembering the event, saying: “It wasn’t like bitcoins had any value back then, so the idea of trading them for a pizza was incredibly cool, no one knew it was going to get so big.”

Compared with the market today, the picture was quite different back then. Today, there are more than 70,000 merchants that accept the cryptocurrency, with block chain transactions that are now averaging around 57,000 per day.

Today, eGifter, which is the popular gift card platform, is giving away extra points to all customers who wish to purchase Domino’s, UNO and Papa John’s gift cards using either bitcoin, litecoin or dogecoin. This company is also providing a 10,000-point prize in honour of the 10,000 BTC used in Hanyecz’s transaction in early 2010.

E-commerce platform provider snapCard is commemorating Bitcoin Pizza Day in a similar fashion. They give away 150 cheese pizzas for $0.99. They were more than happy to announce roughly 30 orders placed in the first 10 minutes of the offer going live.